In Elda, the existence of Dance Groups goes back many years. With the celebration of the Festivity of San Antón, it was also a tradition that together with the image of the anchorite Saint, the “Dances of Elda” or “Dances of San Antón” were performed. However, in the middle of the 20th century any expression of local folklore in terms of folk dances was lost.

In 1991, the school of regional dances is born by initiative of the AA.VV “Estación 4 zonas”. In 1996, the exhaustive work of the Stewardship together with this dance group, managed to recover the typical dances of Elda, for which the help of people who had performed them was required (Mr. Miguel Sierras, Ms. Salud Páez and Ms. Amalia Vera), who claimed that they had been abandoned fifty years earlier. These people collaborated in the process of compiling the different steps until the choreography was completed, as well as the melodies of the dulzaina and the male and female costumes. In their time, the dances of San Antón were performed by an entity called “Coros y Danzas”. 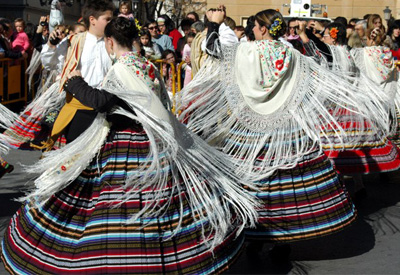 From its beginning there have been many and diverse its performances (Major Celebrations, Proclamation of Moors and Christians, presentations in fallas, visits to the geriatric “El Catí”, performances in other municipalities like Torrent, Folkloric Festival of Sax, etc.), but its determining role is played in the acts of the Half Celebration of Moors and Christians of Elda, celebrated in honor of San Antón, as well as in the day of the festivity of our saint, January 17.

In addition to the dissemination of the dances, another of the group’s objectives is to highlight and publicize the traditional clothing of the area, for which in most of their performances the dancers wear the traditional female dress composed of skirt or long pleated wool with multicolored stripes and apron, as well as black long-sleeved blouse and Manila shawl, as highlights. To promote this objective in 2009, the San Antón Stewardship, with the collaboration of the “Friends of San Antón” association, donated a female and male costume to the Ethnological Museum of Elda where they are on permanent display.

Currently there are about thirty people who make up “La faltriquera”, whose performances are always accompanied by the Stewardship collage.

In addition to the monthly rehearsals that the group carries out, the dances are being disseminated thanks to the invaluable collaboration of the teacher of the C.P. Antonio Machado, Gloria, who selflessly carries out as an extracurricular activity rehearsals of the dances among the students of that school. We could say that at this moment it is the quarry of the dance group, because these students become part of the Stewardship group once they are prepared to dance in public.

Directed by Mari Reme Molina, they continue to delve into the traditions of Eden and the folklore of the community, incorporating new dances from nearby towns such as Sax, Salinas, Pinoso, or Beneixama into their repertoire.

In November 2003, the Stewardship of San Anton decided to create a dance school and a group of dulzainas and drums. To carry out this purpose, in September 2004, the president of the Stewardship that year, José Garrigós, called a meeting at the headquarters of the Central Board of Moors and Christians where the heads of the various musical groups of the comparsas participated. It was at this meeting that the idea of creating a musical “colla” was put forward, to accompany the different acts that mainly took place during the half-party celebration of the Stewardship.

The proposal for this creation was welcomed at the meeting, with great enthusiasm by those attending the meeting, and Micaela Rubio was appointed director, accepting the position provisionally due to her many tasks in the world of parties.

This musical group was set up in November 2004, following an agreement between the heads of the various musical groups and “collas” of the various comparsas and the Stewardship. At the end of October, the Stewardship acquires the corresponding clothing for this “colla”, blouses, scarves, etc., and the first rehearsal under the direction of Micaela Rubio takes place at the headquarters of the Comparsa de Zíngaros, specifically on November 26, 2004, along with the dance group.

Since 2005, Vicente Ferrándiz Esteve has directed the “Colla de la Mayordomía” with the participation of approximately 30 musicians from the different collas of the Moors and Christians Festivities.

The St. Anthony’s Stewardship Choir was born on Christmas 2006. The new Stewardship formed a few months ago was preparing for the Moors and Christians Mid-Festival, and seeing who could be in charge of putting the music and singing into the celebration of the Mass to be held on those dates, thought about creating a group of their own, even knowing the little time they had to create the group and conduct the rehearsals. One afternoon, a few people from the Stewardship met with Micaela Rubio (director of the Zingo Fanfare) and convinced her to get involved in this beautiful project. Little by little people joined the group (many of them close to the Moors and Christians Festival) who brought others who wanted to sing. Micaela was also in charge of looking for people who could put on the music, and so, almost without realizing it, the Stewardship Choir of San Antón was formed, making its first appearance at the Mass of the Moors and Christians of Elda in the Parish of Santa Ana at the end of January 2007.

From then on, little by little the choir grew and consolidated, being almost exclusively focused on the preparation of the songs for the Mass of the Festivity of San Antón and the Half-Festival of Moors and Christians.

At present, the choir is formed by about fifty people (counting also the instruments), who under the direction and the enormous work of Micaela Rubio and the support of the Stewardship of Saint Anton, have managed to be a space of coexistence between friends who prepare, every year, the music that surrounds our beloved Saint Anton.

Over the past few years, the San Anton Stewardship Choir has also made several musical cooperations in different events. The rehearsals are, above all, in the months of September to January, being carried out in the Central Board of Comparsas and in the Z, Headquarters of the Comparsa de Zíngaros.