The city of Elda, which occupies the site of the old Muslim and Christian Illa, is located in the centre of a peaceful valley and today forms a large urban mass of 56,000 inhabitants of industrial and laborious city that has in the manufacture of footwear its largest livelihood, and whose elaborate products of great luxury and design are currently expanding halfway around the world.

In the 19th century, around 1838-1840, when it was a small farming village, it seems that a Festival called Moors and Christians emerged as an evolution of the old "soldier" or local militia that shot their harquebuses in honour of the patron saint, with the influence of a popular culture impregnated with the romantic spirit that prevailed at that time. The famous tribune Emilio Castelar, who lived his childhood in Elda, talks about this rudimentary Eldense Festival in his work "Recuerdos de Elda o las fiestas de mi pueblo". There are also other testimonies of these nineteenth-century festivals - by the historian Lamberto Amat and transmitted orally - which will cease to be celebrated from the last years of the nineteenth century, around 1883.

In 1945 these festivals - which the previous year had featured a "sui generis" demonstration with a heroic outing by festival-goers dressed in borrowed costumes in neighbouring towns - resurfaced. The first five comparsas were created and these formed a festival that grew over the years, creating new comparsas and acquiring great popularity and full participation of the festeros.

San Antonio Abad is the patron saint of this festival, whose worship is lost in time, being one of the oldest religious festivals in the city. The chapel where the image is located occupies a site adjacent to the old medieval mosque of Elda, which later became a church dedicated to Santa Catalina and San Antón. Its liturgical celebration is on January 17th, around which the festival is held until 1946 and currently the so-called Media Fiesta.

In the Eldense Festival there are currently 9 groups, five from the Christian side: Cristianos, Contrabandistas, Estudiantes, Zíngaros, Piratas, and four from the Moorish side: Marroquíes, Realistas, Musulmanes and the Huestes del Cadí. Each of them wears their characteristic official dress, although many of their squads wear splendid special costumes during the parades. In each group, a senior flag bearer and captain are appointed annually, as well as other similar positions for children, who preside over each festive event in these groups. Around 7,000 festeros make up these nine comparsas, with many of them having more than 1,000 festeros in their ranks.

Women play a very important role in the festival as approximately half of its members are women who parade in squads wearing beautiful costumes of various designs.

The festival in present times is celebrated around the first Sunday of June - from Thursday to Monday - unless it coincides with the festivity of Corpus Christi.

On the Wednesday before the festival begins, the Proclamation takes place from the embassy castle in the Plaza de la Constitución, which is performed every year by a prominent figure in music or theatre, followed by fireworks.

On Thursday, the festival officially begins with the Entrada de Bandas (8 pm), in which all the musical groups of each group and the local band Santa Cecilia parade to the Plaza de la Constitución, where they all perform the pasodoble Idella, directed by a prestigious local or foreign musician. At 12 midnight, the informal Retreta takes place, where the festivalgoers parade in their official costumes, forming blocks that evolve to the rhythm of pasodobles or marches.

On Friday morning the harquebusiers of all the groups accompany the banner of the Saint, authorities and the Central Board, shooting the Alardo, to the chapel from where the image of San Antón is transferred to the Church of Santa Ana. At 7 o'clock in the evening the Children's Parade is held, in which only the children led by their positions as Children's Flag Bearer and Captain and the pomp and circumstance of each side are paraded.

On Saturday - at 10 o'clock in the morning - the Arrow of Harquebusiness starts and ends in the Town Hall Square with the Estafeta and the Moorish Embassy, followed by the battle and the assault on the castle. In the afternoon -18 hours- the triumphal Christian Entrance takes place where both sides parade led by the entourage of the Christian Ambassador and the pomp of the parade opening group.

On Sunday, the Festive Diana takes place at 8 a.m.; at 11 a.m. the Offering to the Saint and the Festive Mass, after which a mascletá is shot and the accompaniment of charges is carried out. In the afternoon -18 hours- with the same ceremony as the previous day, the majestic Moorish Entrance takes place, which heads the retinue of the Moorish Ambassador and the pomp of the first of the Moorish groups.

On Monday - at 10 o'clock in the morning - the second Alardo is held, which ends with the Estafeta and the Christian Embassy, followed by the battle and the assault on the castle. The General Procession of the Saint - at 6:30 p.m. - and the subsequent transfer of the image to his hermitage closes the events of the Moors and Christians Festival.

In the acts of the Embassies or parliaments that are the moment when the Moors and Christians festive ritual ends, some texts from the 19th century are used. The Moorish Embassy, which was attributed for a long time to the poet Juan Rico y Amat, is anonymous and has been borrowed from the Alcoy festival. The Christian Embassy is the original work of our city's poet Francisco Laliga Gorgues. They are romantic texts that show a patriotic sense rooted in the people.

For some years now, before the ceremony of the Embassies, a text is recited to divulge the real historical events that took place in Elda during the time of the Reconquest, a work by the local historian Antonio Poveda Navarro.

The Moors and Christians Festival in Elda already has its own musical richness. The Contest of Festive Music, which has reached its XXV edition in 2010, has made that each group has its pasodoble or march, in addition to other elements of the Celebration like the own Saint, the ambassadors, the castle, the seats of Central Meeting...etc. and many squads and festeros of pro to whom it has been dedicated amount of festive pieces of all type to them.

The organization of the Festival of Moors and Christians of Elda is the responsibility of the Central Board of Comparsas, which through its institutions - Board of Governors, Assembly of Committed, commissions - decide everything that is proper to the Festival and its flow through the streets of Elda.

The festival of Elda is one of the most popular of all those held throughout many towns in the Valencian Community. More than 7,000 festive people flood the streets of the city during the five days of the festival with their joyful wandering, accompanied by a large number of bands that with their rhythms of pasodoble, Christian march or Moorish march take the festival to every corner of the population. In each street there is a "cuartelillo" or headquarters of the comparsa or squad, where the festeros attend to everyone without caring if they are Moors or Christians, festeros or paisanos, eldenses or outsiders. Anyone who enters one of these venues - and there are some that are truly marvellous because of their environmental decoration - can see the magic of this festival, the boundless generosity of its festeros, the camaraderie and atmosphere of healthy and sincere coexistence that reigns everywhere. The atmosphere, day and night, breaks all the imaginable moulds of any conception of a festival of this kind and attracts many visitors who share the spectacle of the parades, the nightly festivals in the streets and gardens and the festive and festive atmosphere that can be breathed in every corner of the city. Almost everyone dresses in some way the costume of their group, whether they are Moors, Christians, smugglers, students, gypsies or pirates. Some, the festive people who belong to one of these groups, are more orthodox, while others, the vast majority, wear some characteristic garment of the different costumes in order to be more imbued with the atmosphere and spirit of this wonderful Moors and Christians Festival. 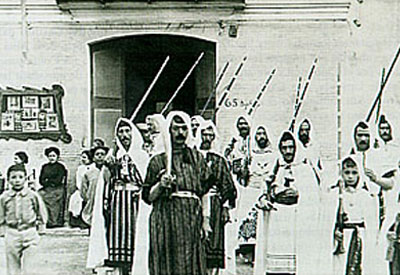 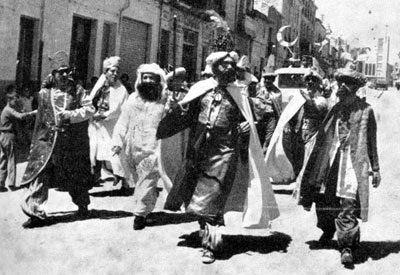 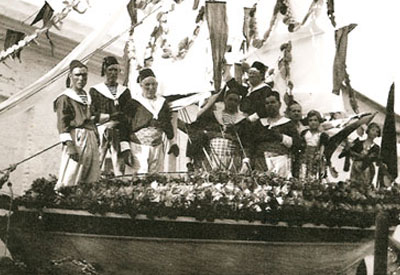 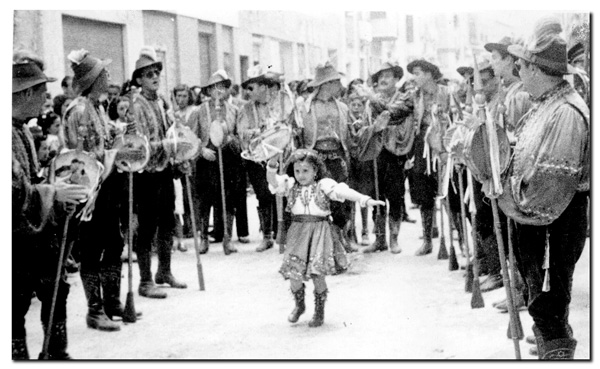 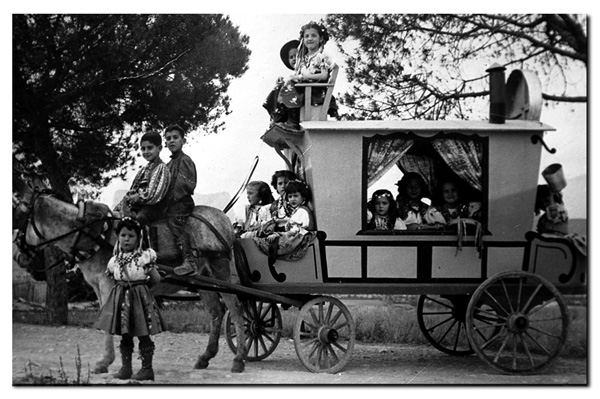 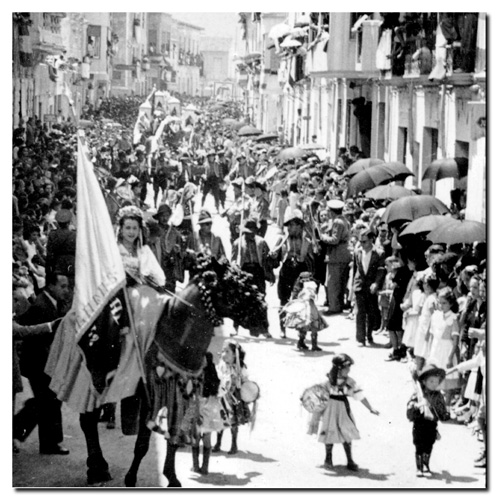