La Mayordomía de San Antón de Elda is the institution in charge of maintaining and enhancing the traditional roots of the religious and recreational festival of San Antonio Abad, as well as preserving the image of the saint and the chapel that bears his name.

The Stewardship of San Anton is integrated within the Central Board of Moors and Christians of Elda, with powers defined in its statutes and extended in the rules of procedure. 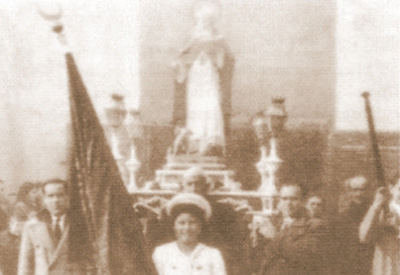 Fragment of the article “Names and forgotten men” by Vicente Valero Bellot; published in the Revista de Moros y Cristianos in 1982.

One of the first initiatives of the Stewardship in that year was the preparation of the party in the following month of January and the acquisition of an image of San Anton to replace the one that disappeared during the Civil War and to this end Francisco Vidal Rico was commissioned to move to Valencia to acquire it, so the then mayor Mariano Segura Martinez extended the safe conduct on November 13, 1939. Fragment of the article “Names and forgotten men” of Vicente Valero Bellot; published in the Magazine of Moors and Christians of the year 1982.

However, in a cold January of 1944, the Festivity of San Antón will be altered by an event that will magnify even more the cult and tradition for San Antón; and it is that that year “our Moors and Christians were born in a somewhat rudimentary way, logically there was no legally constituted board -apart from the Stewardship of San Anton- that organized the Festivity, but there was a group of enthusiasts who donned the costumes lent by Petrel, Sax and Villena and took to the streets demonstrating that Elda could also resurrect these festivities, whose celebration had been lost at the end of the 19th century” Fragment of the article written by José Blanes Peinado and entitled “50 years of the Central Board”; published in the Moors and Christians Magazine in 1996. And it is the following year, in January 1945 when the Moors and Christians Festival returns to the streets of Elda with the first groups. The traditional acts of the celebration of the Festivity of San Antonio Abad are intermingled with embassies and parades. 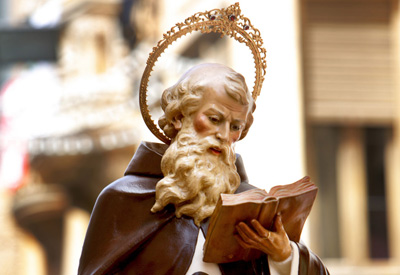 Although we do know how the Stewardship works and how it was composed during the years after 1947, the change in 1947 of the celebration of the Moors and Christians Festival to the month of June, made the news of the existence of a Stewardship and the events held in the month of January from that year until the middle of the 70s, with the recovery of the Stewardship of San Antón again by Jenaro Vera and Antonio Barceló, be more diffuse.

But from those beginnings in 1939, through the mid-1970s (when he recovered again and became a member of the Central Board) to today, many people have been part of the Stewardship, and in one way or another continue to do so.